At the end of the past school year, I shared my experience “un-schooling” my classroom and giving a final on Twitter (You can read all about that here). Over the summer, I worked with my wonderful colleagues Rabbi Daniel Rosen and Mrs. Meryl Feldblum to create a project-based learning curriculum for The Frisch School‘s Honors Sophomore classes. One of the assessments and experiences we wanted our students to have was a Twitter chat that would have them reflect on the lessons they had learned about the first part of the school year, which will be about stock characters, stereotypes, and how literature gives voice to the voiceless.

We weighed the pros and cons of a Twitter assessment over other types of evaluations and decided to take our dialogue public in case other teachers wanted to learn from it. Before we share what we’ve been contemplating, we wanted to point to other educators finding uses for Twitter in a school setting:

How (and Why) to Try Twitter Teams in School

1) How exactly do you run a Twitter chat for your students?

Note: This is our way. What is your way? There is no the way. (#Nietzscheintheclassroom)

Step One: If you don’t know what a Twitter chat is, check out this blog post to find out, and think about the ways you’ll be adapting the forum for your classroom.

Step Two: Make sure all your students have a Twitter account, and read these helpful safety tips: Twitter Safety Tips for Teachers. I found it useful that my students had already tweeted to me early on in the year, and we practiced having a discussion before the exam.

Step Three: Choose a hashtag for the chat. This is obviously an important step, since you’ll all be tweeting to the hashtag. Our hashtag was #10final. Here are examples of tweets from before and on the day of the final:

An important lesson from this year’s curriculum bc It has allowed me to think outside the box, against the normal rules of school.. #10final
— Benni Tuchman (@BenniTuchman1) May 31, 2013

Step Four: Teach your students what a Twitter chat is. I’ve learned so much from my Twitter PLN, #jedchat, and I explained what it was to my students as an example of the kind of roundtable discussion we would be having. Vicki Berhman of Behrman House pointed out that the Twitter final sounded a lot like the Harkness Method of teaching, and I wholeheartedly agree. Check out some ideas about the Harkness model, which emphasizes a collaborative, student-centered approach to having class discussions.

Step Four: Have everyone be in the same room for the Twitter chat. I know this sounds strange, given the fact that one of the advantages of a Twitter chat is that no one has to be in the same place. I found that part of the excitement of the medium was having everyone present. I was able to gauge student interest, participation, and knowledge not only from what the students tweeted but also from what they were saying and doing during the hour-long chat. Students were excitedly responding to each other and calling out ideas they wanted to share as they tweeted. Because the exam format is a new one, being in the same room allowed me to answer questions students had about the format and to solve technological glitches.

2) How is a Twitter chat different from a well-moderated class discussion?

A Twitter chat is different in a number of ways:

One: It has more authentic purpose than a class discussion, since it can be seen by a large audience. In fact, I asked members of my PLN to join the chat, and four colleagues did so, adding a layer of complexity, relevance, and fun that a class discussion wouldn’t have had. Ken Gordon, PEJE’s Social Media Manager, a JEDLAB co-creator, and a book aficionado, challenged the students to think more deeply about the books they had read, and because he is so funny, made them see they could laugh about characters as serious as Jay Gatsby. Yechiel Hoffman, another JEDLAB co-creator, Adrian Durlester, a JEDLAB facilitator, and Charles Cohen, Manager of PEJE’s Affordability Knowledge Center, also joined the Twitter chat, making the students feel that what they were doing and saying was important. My class definitely felt more heard and validated because of the involvement of my colleagues, some of whose tweets you can see here:

This became apparent to me even before the final, as the students and I spent time trying to figure out what kind of authentic assessment we wanted to have for the end of the year. When we decided on the Twitter chat, I asked a student what she thought of it. She said, “I get it. We’re making the final together.” Because project-based learning, what the class had engaged in all year, focuses so much on content creation, no response could have pleased me more. The student saw the final as a collaborative act of meaningful creation.

To reinforce the feeling, I archived the chat immediately after the final and shared the archive with the students on the Facebook group we had created. The post immediately received a whole bunch of Likes. You can see the archive here. 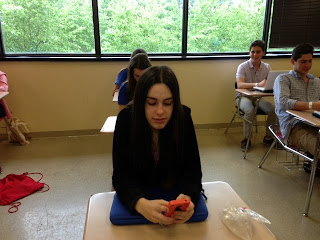 Three: The chat created joyful learning. I’m a big proponent of making learning joyful and fun, and the chat did just that. I realize it was partly because it was a new toy, and if we did it all the time and if every assessment was on Twitter, it would quickly lose its shine. However, employed as it was, after a year of PBL and with the consent and buy-in from the students, it was a huge success. Not only were the students excited during the chat, but they went home after the final and told their parents about it; for a few days after the exam parents in the community who saw me stopped me and let me know how much fun their kids had had. I always want learning to be that exciting. 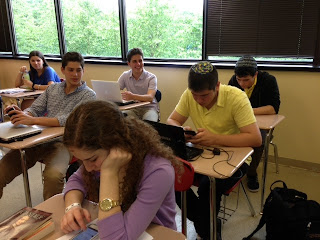 Some pre-final, buzz-building tweets:
Danielferber97: I have never been more excited for a final, and I get pretty excited for
finals #10final
livmylife1: @CoryBooker first ever twitter final at Frisch! Starting at 9:35 EST #10final.
Please join us!
6/14/2013 1:09:52 PM

Four: No doubt, well-run discussions force students to think deeply about a subject and challenge them to question their opinions and beliefs, and I still think class discussions are valuable in the same way that frontal teaching still has a place in the classroom, even a PBL one. What I liked about the Twitter chat was that students didn’t have to adhere to one discussion thread at a time. I threw out questions, and the students answered them as well as each other’s responses, so that the discussion was at once contained but free to move in diverse places. Still, the chat stayed relevant to our school year, spiraling around its major themes and creating a harmony of ideas about whether one should pursue utopias; the ability to manage lust and longing; Western hierarchies and classism; and the role we as Americans should play in the world. Here’s a taste of what the chat was like:

madmillertary: CD* also shows that a utopia can be different for different people and

* CD stands for Candide by Voltaire

world” nothing is ever as perfect as it seems #10final

dzuck0114: A complete U/dystopia is not possible. CD and 84* show that always in

society there will be upper/lower [email protected] #10final

swimer123: The books we read this year were very European and class based.gave me

a greater appreciation for America #10final

must open our minds to the larger problems in the world! #africa #10final

human nature to lust for what they [people] can’t have. #10final

livmylife1: @swimer123 #10final I agree that Adam and Eve show that man always

shows his [Shakespeare’s] continuation of his thought on true love, not physical love.

bennituchman: @TikvahWiener Judaism disciplines us and makes us choose what is

solomonrapoport: @swimer123 but that brings us back to the point of reaching for the

impossible. If u try for a perfect life, ull get a full life. #10final

What I found was that the students made comments that were far deeper and richer than I expected and did so in a natural and organic way. Which leads me to my next benefit . . . .

Five: Digital Literacy. The students saw that an online forum can be a dynamic place to exchange views not about the tawdriness of Miley Cyrus’ twerking but about matters of deep significance to themselves and the world. They adhered to the rules of netiquette, which we had reviewed only minimally, agreeing and disagreeing with each other respectfully, and making social media a place for lively, sophisticated, and engaged dialogue about important, soul-deep matters.

bennituchman: I’m ready to discuss and respond to each other #10final

solomonrapoport: @AjulianK I disagree. He finds his version of a “utopia,” although it

may not seem ideal #10final

AjulianK: @solomonrapoport I wrote how he finds a good society. But it doesn’t fulfill

his criteria of a utopia #10final

jrosen97: @swimer123 #10final but doesn’t it make you realize how corrupt society is?

dzuck0114: @BennyWeisbrot I dont agree. Although book is described as dystopia,

would the Inner Party say that they live in a dystopia? #10final

Six: If you’re into Big Data, a Twitter chat supplies it in a way that a discussion only vaguely does. What was interesting to me was that the students who participated most in class were generally the ones who tweeted the most. Generally. Not all. And I have the stats to prove it:

Now that I have this information, I know how to set up an even more effective Twitter chat next time, by showing my students exactly what I’ll be looking for and what they can do to make an impact in their chat.

In fact, here’s my new Twitter chat rubric. I’d appreciate feedback on it.

What about Grammar, Spelling, and Punctuation?

As you can tell, I wasn’t as concerned with the mechanics of writing as I would be in an essay. I did tell students that they couldn’t use the wrong forms of its and it’s and their and there and that I wanted them to make some sort of grammatical sense in their syntax, but a Twitter chat isn’t the ideal place to teach proper mechanics. About two weeks before the final, the students had handed in a five-page term paper on one of Shakespeare’s sonnets, and they had had multiple opportunities to write and revise their writing throughout the year. My aims for the Twitter chat were different, but I do see digital literacy as an important part of any classroom, not just an English one, so I was satisfied that the forum was an appropriate one for my purposes.

If you want to ask additional questions about this assessment format, feel free to contact me at [email protected]. But if you have some experience on Twitter and want to give this a try, I can assure you you and your students won’t be disappointed. And please let me know how it goes!